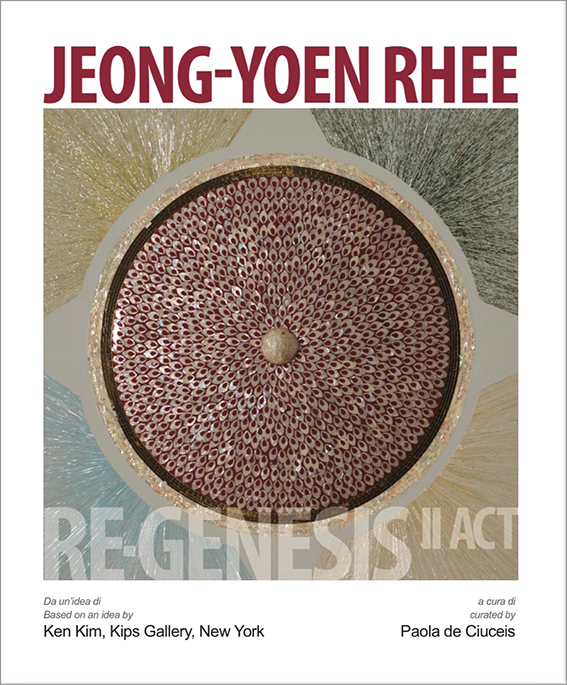 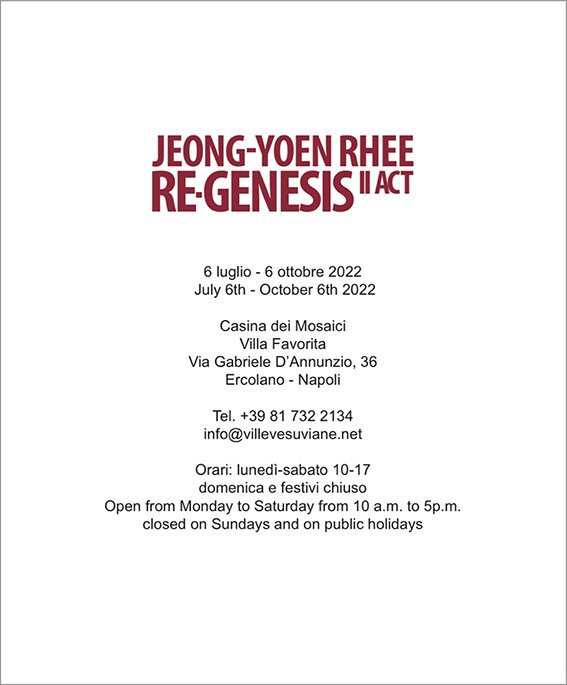 Vibrant, dynamic, vigorous, perceptive, brilliant. The pictorial work of Korean Jeong-Yoen Rhee immediately captures both the viewer’s gaze and soul. Magnetic. Owing to the forms that traverse sheets of paper as well as canvases, and to the colours which define her oeuvre, and the originality of the materials and the technique (she uses her thumb, and not a brush, to paint). The gracefulness of the compositions, seemingly decorative, is, on closer inspection, imbued with profound spirituality. The all-encompassing aspect of her thoughts intertwines with the materials taken from the earth, the practice of Zen, meditation, yoga and a sense of the divine which is a veritable tribute to nature from which, in one with religion, the artist draws a message of hope and comfort in response to the chaos of contemporary life.

Nearly two years after the first exhibition in Naples, October 2020, when the pandemic was still rampant, Re Genesis has returned, enveloped in the enchanting atmosphere of the Casina dei Mosaici of Villa Favorita in Ercolano, once again at the initiative of Ken Kim for Kips Gallery New York, in a renewed formula: specifically, Re Genesis Act II. The Fondazione Ente Ville Vesuviane has enthusiastically welcomed the idea of cultural exchange as it was impressed by the disruptive force of the works that interact with the Vesuvian territory despite the distance of the artist’s origins and training, and even more so by the proximity to the place where it finds its natural setting. This is owing to the ideal union between the building’s beautiful polychrome coverings of the vestibule and the hall with mother-of-pearl fragments and the mosaic technique, a recurring motif of some cycles of the artist’s works.

Of immense visual and emotional impact, the Korean artist’s expressive exploration materializes in the form of environmental art aimed at seeking a bio-vegetal conjunction between the elements in order to delve into the relationship between man and nature. She offers testimony of this concept which leads towards universal values; a dreamlike world to which she provides a countenance using mosaic and mother-of-pearl inlay, her two favourite techniques. In addition to dialogue and contrast, she uses these techniques to infuse all her mastery and sensitivity in giving every possible organic material a new form, Re Genesis.

On exhibit is a summation of the last two decades in which the years of training, first in Seoul at Master Jong Sang Lee’s School of Oriental Painting and, subsequently, in the United States with a degree from the Pratt Institute and a doctorate from Columbia University in New York followed by her experience in Europe; all stepping stones that, over time, have made her one of the most influential contemporary personalities, an expression of that generation of Korean artists who have lived between West and East developing a dialogue between the two worlds and a synthesis of the encounter between our modernism and their spiritualism.

This exhibition brings together a body of outstanding large- and medium-format compositions; two-dimensional paintings that span the gamut from figuration to abstraction and vice versa, veritable brief philosophical treatises on human nature and intense metaphors centred on the deepest sense of moral values, highlighted by an expressive constant consisting of delicate and elegant strokes. This is the result of extensive observation and deep meditation on the sense of space and art dominated by the idea of a new genesis.

Combining nature, spirituality and religion, expressive purity with a profound mastery of techniques and materials, Jeong Yoen Rhee celebrates her forty years of activity with an interesting cultural exchange between three countries-Italy, the U.S. and Korea. A unique opportunity to become familiar with an artist who encompasses the convergence of distant and powerful cultures.

Her challenge is to reorganize universal chaos, starting with the most familiar and recognizable objects, and describe the world in another way. Much in the manner of a demiurge, Rhee uses her hands to mix without the mediation of any kind of instrument: without palette knives or brushes, using only her thumb to spread the paint with extraordinary mastery, utilizing the exact amount necessary to obtain the aesthetic effect desired and to convey the aesthetic sense of her vision.

Rhee, re-evokes earth – flowers, plants, fruit – in her selection of materials and in the use of artisan methods, for example, she kneads soil with her hands and spreads colors with her finger; the result is a theory of refined combinations – marked by iconic images outlined by casual but highly evocative forms. Sketched in the graceful, poetic strokes typical of the Oriental traditional with long strokes and calligraphic style, her oeuvre expresses a delicate, but profound vision of art and of life. The intelligence and the sensibility in her approach to certain themes are such that Rhee’s paintings are characterized by their visually impelling lyricism and profound significance. Marked by irregular forms, these works are reminiscent of familiar forms such as spheres, funnels, coffeepots, wind instruments, trees, fish, lotus flowers, stars skillfully intertwined with elements of nature – water, rain, stones, shells, bone fragments – suggesting a sense of empathy with the cosmos. An entirely different matter is bamboo, a theme which is very popular in the artist’s traditional culture and is frequently present owing to its highly symbolic, characteristic significance: strong and resistant, with flexible, hallow, jointed stems which are always straight; emblematic of resoluteness, it serves as an example for individuals who, in sharing abilities and values, may find the very crux of society.

Zen, meditation and yoga have always been part of Jeong-Yoen Rhee’s life which garners her expressive representations from the mental images of these disciplines; guided by currents of spiritual light, the artist channels swirls of emotions and consciousness which materialize in representations of the world, nature, and of the spirit itself as the artist closely binds art and life. By making religion central, observers travel with their eyes and minds to alleviate life, which is no easy task, using prayer and reflection to unburden their lives.

A great experimenter, Rhee stands out for her selection of materials using organic materials which she prefers over industrial materials for their capacity to maintain unique hues and original properties of smell and color. Among those most used are: lacquer, obtained directly from lacquer trees, and clay, soil and volcanic ash, charcoal and gold powder, egg shells, mother of pearl, red clay which, with their reflexes and hues, lend an aura of mystery to her works. Her preferred supports include hand-made Korean mulberry paper, hemp cloth woven by loom or by special machinery which provides the coarse-textured fabric used for traditional Korean clothing. Continuously in search of the divine, Rhee knows no limits in defining forms and she moves with nonchalance between two and three dimensions. Indeed, three-dimensional works allow her to express the harmony of nature and the energy of spiritual life.